Is Your Screen Time Causing a Slow Metabolism Overnight? 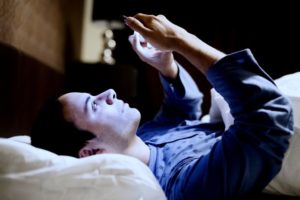 If you’re wondering what is causing you to have a slow metabolism, don’t forget that it’s not just your daytime activities that have an impact. What goes on at night also influences your metabolic rate.  This includes the quality of your sleep and, according to new research, the light exposure you’re receiving from screens at bedtime or when you wake up overnight.

What Research Says About Slow Metabolism at Night

According to a study published in the Scientific Reports journal, blue light exposure in the evening doesn’t just have the potential to be disruptive to your sleep cycle.  It may have other health impacts such as causing a slow metabolism overnight.  This could be causing unnecessary weight struggles worldwide, as many people keep up their screen time right up until they shut their eyes at night and may even check their devices if they wake during the night.

Whether sitting in front of a laptop, watching TV in the evening, chatting with friends over messenger programs on a phone, checking social media, or browsing online stores on a tablet, exposure to screens is nearly constant in the lives of millions of Americans.

The researchers point to the light exposure as the culprit behind the slow metabolism at night linked to screen use.  The LED screens don’t use a lot of electricity, they don’t produce much heat and are long-lived.  However, they produce substantial amounts of blue light.

According to research in the Journal of Clinical Endocrinology and Metabolism, blue light exposure is disruptive to circadian rhythms. Those are the body’s hormone rhythms and waking/sleeping clock.

As an extension to that, researchers have been finding a connection between bright artificial light and weight gain, obesity, insulin resistance, and other types of metabolic disorder in general.  More recently that research has pointed to that light exposure – and blue light in particular – as a factor relating to a slow metabolism, particularly overnight.

The likely link between blue light and health issues such as a slow metabolism has caused researchers to turn their attention to organic light-emitting diodes (OLEDs).  OLED technology is becoming a more common screen technology in new models of phone, tablet, computers and TVs. This tech produces less blue light than traditional LEDs.  As a result, the hope is that it will also be associated with reduced negative health impacts connected with traditional LED screen use.

That said, no matter the type of device you’re using, if you’re struggling with a slow metabolism, it’s typically recommended that you shut off all screens an hour before bedtime. Once they’re off, don’t use them again until you’re ready to get up in the morning.

If you’re still concerned about a slow metabolic rate, consider the benefits of metabolism support pills during the daytime to give your weight management efforts a hand.